Let’s rewind back to Sunday night in Denver when the Nuggets hosted the Pelicans. At the end of the third quarter, the Nuggets trailed by 10 points (94-84) and reigning league MVP Nikola Jokic had 16 points, eight rebounds, eight assists, two steals and three blocks. Just looking at that stat line alone, only four other players this season have reached those marks or better in an entire game. But Jokic was far from done.

The Nuggets would outscore the Pelicans 40-30 in the fourth quarter with Jokic scoring 23 of those points on 7-for-8 shooting from the field and 9-for-9 from the free throw line – the last two free throws coming with 3.2 seconds left to tie the game and send it to overtime. At this point, Jokic was up to 39 points, 11 rebounds, 10 assists, three steals and four blocks. No other player has hit those marks in a game going all the way back to 1976-77 when steals and blocks became official stats. But Jokic was still not done.

Jokic’s brilliant performance begged the question of which players have been most dominant in the fourth quarter and overtime this season. And despite his 23-point outburst in the fourth quarter against New Orleans, Jokic does not rank in the top 10 among fourth-quarter scorers so far this season. Through games played on Sunday, March 6, Jokic ranks 12th in the league in overall scoring (25.8 ppg) and 18th in fourth-quarter scoring (5.6 ppg) with a minimum of 30 games played. 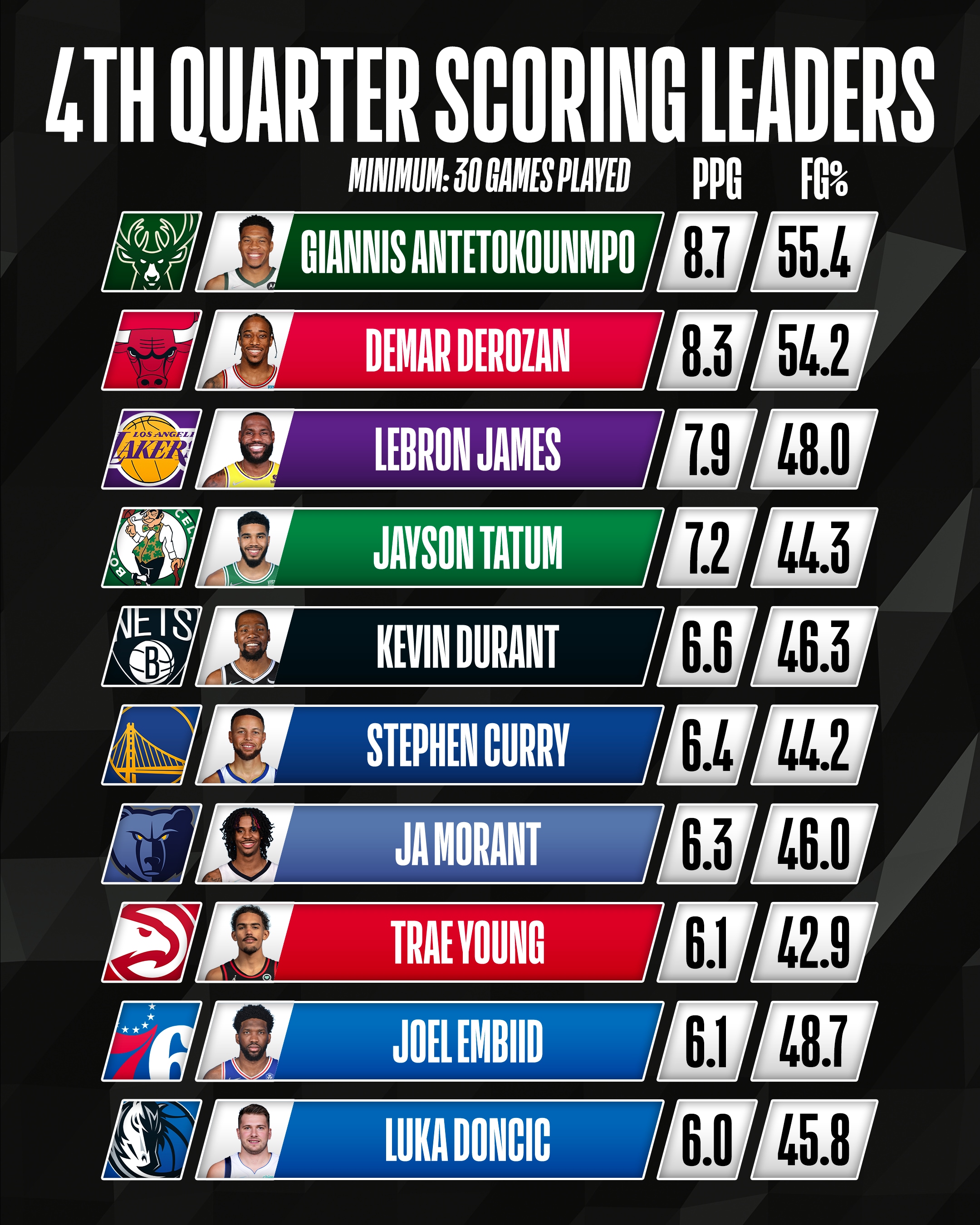 However, when it comes to overtime scoring, Jokic is right near the top of the list as he has averaged 9.7 points on 84.6% (11-13) shooting in three overtime games this season – Denver has won all three games. Only OKC’s Luguentz Dort has averaged more overtime points than Jokic (10.0 ppg over two games) as he has been nearly as efficient (83.3 FG%) as the Joker. 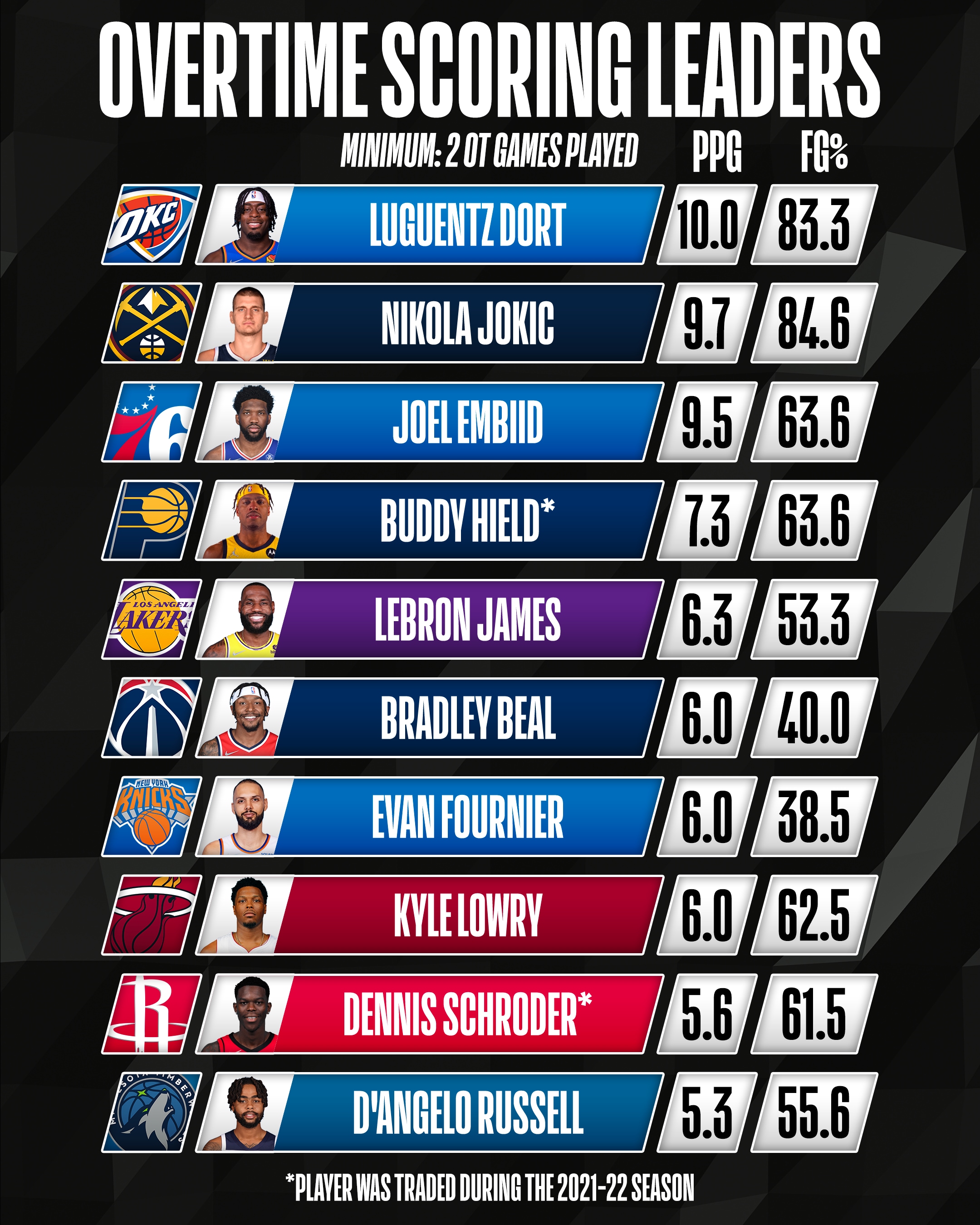 When comparing the two lists, LeBron James and Joel Embiid are the only two players that rank in the top 10 in both fourth quarter and overtime scoring this season, with both players increasing their scoring efficiency in the extra sessions.

LeBron is averaging 7.9 points on 48% shooting in the fourth quarter and 6.3 points on 53.3% shooting in overtime, helping the Lakers to a league-high six overtime wins compared to just one loss (0.857 win percentage).

The difference in sample size between fourth quarters and overtime sessions really comes into play when comparing these two lists. So far this season, there have been 44 games that have gone to overtime and a total of 53 overtime sessions have been played. With fewer games played, it allows a single performance to stand out more and therefore more variance can be seen among the league leaders.

On the flip side, if you look at the top 10 scorers in the fourth quarter, you will see nearly all of the same players in the top 10 in scoring for the entire season, just in varying order. The only exception to this rule is Utah’s Donovan Mitchell, who ranks 10th in overall scoring and 14th in fourth-quarter scoring.

Giannis Antetokounmpo not only averages the most fourth-quarter points, his scoring in the fourth represents 29.8% of his total points scored per game – the highest percentage among this group, followed closely by DeMar DeRozan (29.5%). Meanwhile, the biggest drop off belongs to Embiid, who ranks second in scoring overall, but ninth in the fourth, with just 20.7% of his points coming in the final 12 minutes of regulation. However, as noted above, when the Sixers do face overtime, Embiid takes over.

This past week saw three of the top 10 fourth-quarter scoring performances of the season: Jokic’s 23 points against the Pelicans on March 6; Cam Johnson’s 21 points (including the game-winning buzzer-beater) against the Knicks on March 4; and Jayson Tatum’s 21 points against the Grizzlies on March 3. However, Charlotte’s Kelly Oubre Jr. continues to hold the top fourth-quarter scoring game of the season with 24 points on 8-for-9 shooting from 3-point range in just eight minutes against Detroit on Jan. 5.

Warriors Proving to be More than Curry, Draymond and Klay