To lose once in the Champions League round of 16 may be regarded as a misfortune. To lose twice looks like carelessness. To lose four times in the last six years makes you Paris Saint-Germain.

PSG suffered a sensational collapse in the final half-hour of their tie against Real Madrid on Wednesday, dissolving from a relatively cohesive football unit into a comedy of errors.

It is a result that brings a number of interested football parties to a quiet crossroads. Real Madrid will now fancy themselves for a further European triumph as well as snaffling Kylian Mbappe’s signature in the summer. Neymar’s last great chance to win the Ballon d’Or has come and gone with little fanfare. Zinedine Zidane’s phone is likely ringing with interest.

Then there is Manchester United, longing for their return to Europe’s centre stage, wondering if it is a good idea to hire a very good football manager who has just suffered a very bad result.

PSG’s failure in Europe will likely bring about the departure of Mauricio Pochettino in the summer. This could mean the Argentinian, who has long been eyed up as a possible future United manager, could be brought to Old Trafford without having to extricate himself from any previous contract. PSG’s defeat has likely gifted United an easy (or at least easier) opportunity to get one of the best (or at least better) football managers without having to pay a buyout clause.

But should United take that opportunity? Especially given what happened to Pochettino’s team at the Bernabeu?

There is an alternate timeline, where Lionel Messi scores his penalty in the first leg of this tie, or Mbappe’s sensational body-feint-and-shoot effort in the second leg is onside and PSG march on to the quarter-finals. In that timeline, football writers will praise Pochettino’s deployment of Messi as a false nine at the Parc des Princes before hailing his tactical nous. 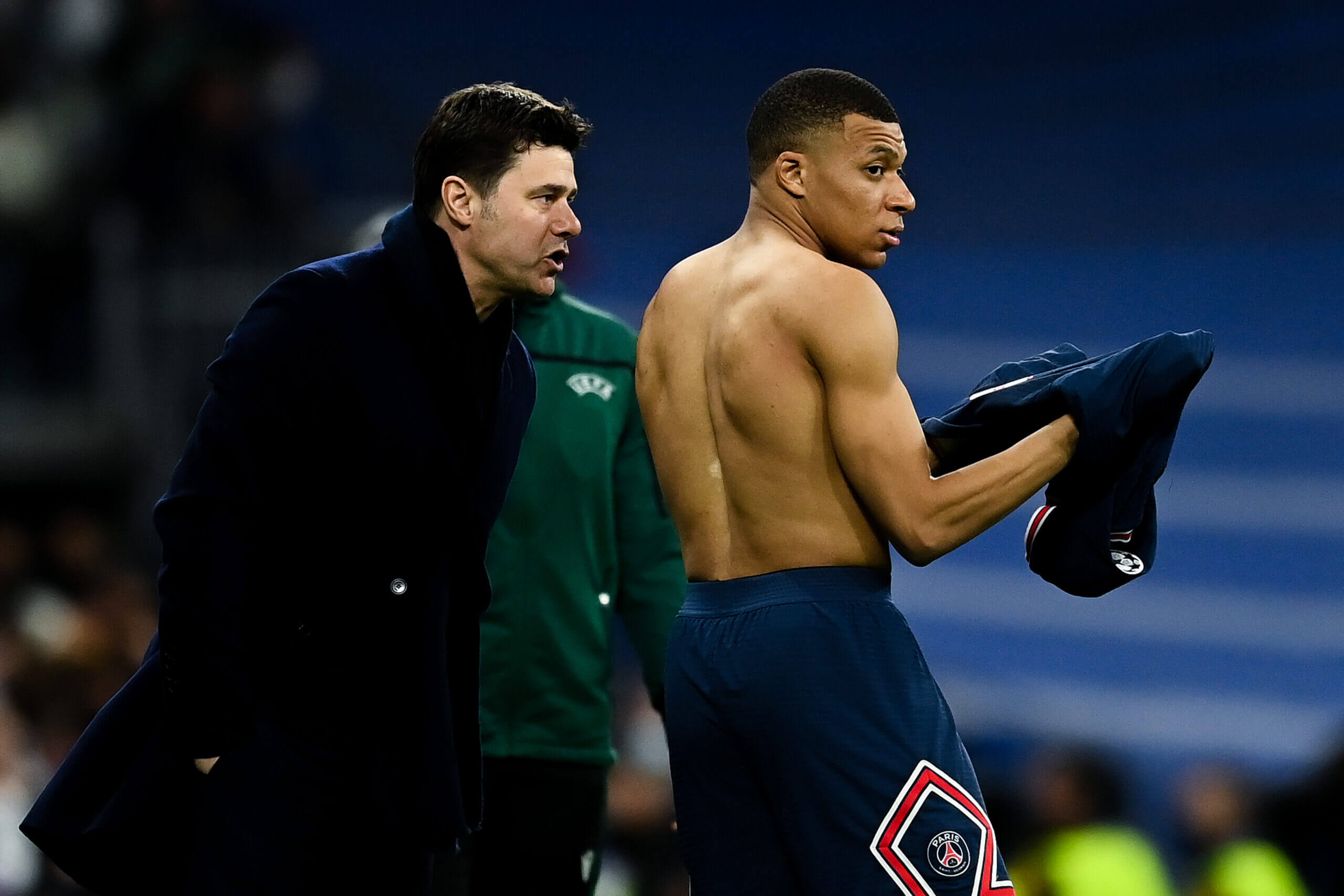 But now he has lost, some United fans are cautious about their club bringing in a talented if flawed manager who could be available for nothing in the summer.

Overcoming outcome bias is a difficult thing when assessing football decisions but, save for some of the petulant fouling that occurred in the closing minutes at the Bernabeu, it would be difficult to describe this Paris Saint-Germain side as one moulded in Pochettino’s image. The ratio of piano carriers to piano players has never been quite right.

Messi may have made two more successful tackles than Marquinhos and Presnel Kimpembe combined on Wednesday but the 34-year-old cannot be expected to put in the sort of defensive work Pochettino typically requires from his forward players. It is hard to imagine Messi, Neymar or a number of PSG’s expensively assembled stars taking part in the punishing bleep tests that Pochettino put his Tottenham and Southampton sides through in order to sharpen their fitness.

This Paris side are a good collection of players led by a good football manager, but a difference in thinking and footballing approach makes it difficult to assign responsibility when things go wrong. Did PSG fail their manager or did their manager fail PSG?

At his best, Pochettino takes unfavoured and overlooked players and shows them the merits of the collective whole. He forms a strong emotional connection with his players and their fanbase to create a mesmerising aura.

Pochettino teams punch above their weight and often bloody the noses of teams with more money and more historical prestige. They play with the discipline and collective intelligence to stop something they know is coming… but can find themselves scrambling when hit by an unforeseen variable.

Pochettino is an interesting manager in that he is a champion and victim of the fictions in football that make themselves true when enough people believe in them. PSG are the same: did they wilt in their biggest game of the season owing to the self-fulfilling prophecy that they choke in big Champions League games? There are bigger, more tangible and tactical reasons for Real Madrid’s win — especially the impact of Eduardo Camavinga’s introduction in the 57th minute — but, on the broadest level, PSG are out of the Champions League because Pochettino failed to adjust to a momentum swing of a game in its most crucial moments.

It is a flaw that has been evident throughout his managerial career. In the 2017-18 Champions League round of 16 when in charge of Tottenham, he struggled with a staggered double substitution from Juventus manager Massimiliano Allegri. By the time Pochettino had adjusted to the influence of Kwadwo Asamoah replacing Blaise Matuidi, Stephan Lichtsteiner had entered the field for Medhi Benatia to change things further. Two goals were conceded in three minutes and Spurs were eliminated.

Pochettino has moments where he believes himself to be winning a tactical chess game, only to reach the full-time whistle and find he’s lost at poker. Why would any top club with high aspirations wish to hire a man who can appear naive in this regard?

The answer it seems is because Pochettino remains a good manager in most major aspects of the modern game, and he might be the sort of hire that United have failed to make since the retirement of Sir Alex Ferguson. In the nine years since they last won the Premier League, United have had more interim managers than permanent ones, and they have never hired a top manager when said coach was at the top of their game.

The possibility of Pochettino in the summer is a difficult one. If United chose to pursue him they are at once hiring one of the best football managers in the world but also someone who will be three years removed from reaching the Champions League final, and five years on from his greatest Tottenham side in 2016-17. There is risk involved in hiring him that would not be present if United sought out someone like Erik ten Hag, who would come with his own, different positives and negatives.

Mauricio Pochettino is not a mythical saviour of football clubs. He wasn’t when PSG defeated Real Madrid in the first leg, and he isn’t now PSG have been knocked out in the second. He is is a good-to-great manager who can achieve good-to-great things when he works at a football club that empowers him to create footballing momentum. That might be enough for United if they choose to hire him as their next permanent manager.

It might also bring more catastrophe if Pochettino finds himself overwhelmed by the dysfunction present at Old Trafford, Carrington and beyond. If player power, poor off-the-ball defensive work and high expectations will prove to be too much for Pochettino in his 18 months at Paris Saint-Germain, then he will be in for a challenge if he takes over Manchester United.

Perhaps PSG’s collapse and United’s recent travails should not be thought of as the failures of their football managers, but as the result of short-sighted decisions made by the club officials who run these so-called super clubs. Rather than search for managerial unicorns to save everything, United (and in turn PSG) should try to create an environment where a quality racehorse can thrive instead.