Less than nine months since England hosted a Euros final and we’re already counting down the days until the next – this time in the women’s event.

There are just 100 days to go until the opening match of Euro 2022, a tournament which is set to draw the biggest crowds ever seen at the Women’s European Championship.

The competition, being held at 10 stadiums in England from 6-31 July, was originally scheduled to take place last year but was moved back 12 months because of the Covid-19 pandemic.

Here we take a look at some of the main talking points, including which team will replace Russia and how Northern Ireland will fare on their debut.

To mark the 100 days milestone, remaining tickets will go on general sale at 08:00 BST (on 28 March) for the 31 matches, although ticket sales have already broken previous records.

In August it was announced that 53,000 tickets had already been bought for the Wembley final, which would surpass the current record attendance of 41,302 when Germany defeated hosts Sweden at Euro 2013.

England kick off this year’s tournament against Austria at Old Trafford on 6 July, with the final being held at Wembley on 31 July.

Who will replace Russia?

There will be 16 nations taking part, although we only know 15 of them after Russia were kicked out of the competition following the country’s invasion of Ukraine.

Russia were meant to be in Group C alongside the Netherlands, Sweden and Switzerland, with all three of their group matches set to be staged at Leigh Sports Village.

European football’s governing body Uefa is yet to announce who will replace them, although one option would be to bring in Portugal, the side that lost 1-0 on aggregate in the two-legged play-off to Russia.

Another possibility is for the three nations that lost in the qualifying play-offs – Portugal, Ukraine and the Czech Republic – to be involved in a draw to select the replacement.

Whoever does come in will have one of the toughest tasks to advance as only the top two in each group move on to the quarter-finals. Sweden and the Netherlands are ranked second and fifth respectively in the Fifa world rankings, while Switzerland are 19th.

England have never won the Women’s European Championship, but lost twice in the final – on penalties against Sweden after a two-legged final in 1984 and then 6-2 to Germany in 2009.

In the last tournament, held in 2017, the Lionesses lost 3-0 in the semi-finals to hosts and eventual winners the Netherlands.

This is only the second time England have hosted the tournament – they finished bottom of their group in 2005 – so could this be their time to triumph? 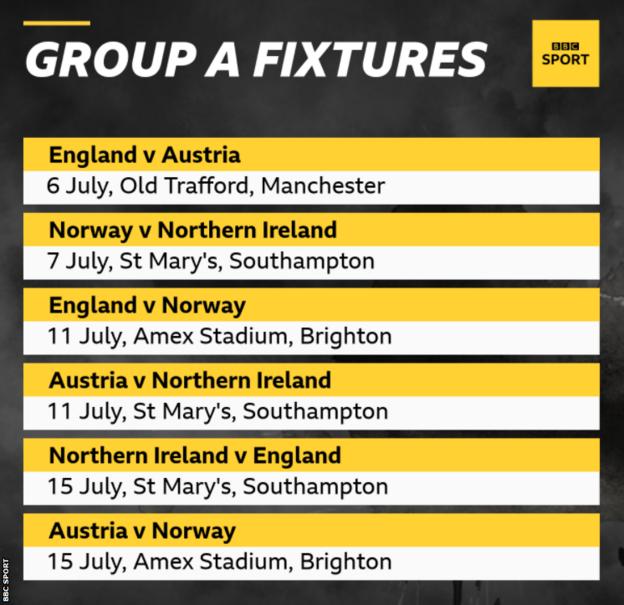 England scored two late goals to beat Germany 3-1 in the tournament’s final match – their first win over Germany on home soil – to finish above Spain on goal difference and lift the trophy.

Manchester City defender Steph Houghton, who captained England under the previous two managers, is a doubt for the tournament and is currently out of action following surgery on an Achilles injury.

Northern Ireland qualified for the competition for the first time thanks to a 4-1 aggregate success over Ukraine in the play-offs, although Kenny Shiels’ side are the lowest-ranked team at Euro 2022 – 46th in the world.

The next month will be a good test for Northern Ireland as they play two of their Euro 2022 opponents, Austria and England, in World Cup qualifying.

Northern Ireland are currently second in that group, level on points with Austria but five behind England after Wiegman’s side beat them 4-0 in October.

Who are the main contenders?

However, Spain are the betting favourites as their squad features a large number of players from European champions Barcelona, including 2021 Ballon d’Or-winning midfielder Alexia Putellas and striker Jennifer Hermoso, who came second in the voting for the award.

The Netherlands are the reigning European champions and reached the World Cup final in 2019, losing to the United States. However, both of those achievements came under their previous manager – England’s new boss Wiegman – and they now have Englishman Mark Parsons in charge. Goals shouldn’t be hard to come by with Arsenal striker Vivianne Miedema – who is the Dutch team’s and Women’s Super League’s record scorer – among their stars.

Sweden finished third in the World Cup three years ago – beating England in the third-fourth play-off – and have been drawn alongside the Netherlands in Group C. In the past two years, Sweden have only lost once, on penalties to Canada in the Olympic final.

The Netherlands’ success at the last Euros ended an incredible run by Germany, who had won the tournament six times in a row from 1995 to 2013. They boast some exciting youngsters and will be looking to progress deep into this year’s competition after going out in the quarter-finals five years ago.

France have won 10 consecutive matches and earlier this year defeated Finland, Brazil and the Netherlands to win the Tournoi de France. However, France do not have the best of records in European Championships, losing in the quarter-finals in 2009, 2013 and 2017.

Former Ballon d’Or winner Ada Hegerberg has given Norway a boost after the 26-year-old Lyon forward last week reversed a decision to retire from the national team following a five-year absence. Her side play Northern Ireland and England in their opening two matches.